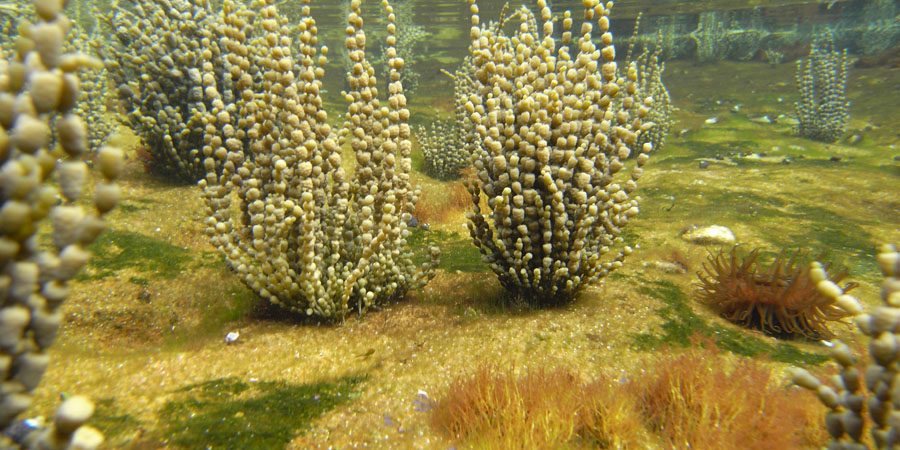 Hormosira banksii is a brown macroalga that can be found on intertidal rock platforms and tidepools along the south-eastern coast of Australia. It is characterised by strings of olive-brown beads resembling a necklace, giving rise to its common name, Neptunes Necklace. Hormosira often forms dense mats which provide habitat for other marine organisms, such as crustaceans, molluscs and echinoderms.

The characteristic beads of Hormosira contain gas, allowing them to float up in the water column and move with the flow of the current. The beads also contain water, which prevents desiccation at low tide when the alga are exposed. On the surface of the beads are the reproductive structures, pimple-like in appearance,
out of which the gametes are exuded at each incoming tide. Spawning takes place throughout the year, with the female gametes being olive-green in colour while the male gametes are orange.

Ecotox Services Australia currently offers a H. banksii germination test for assessing the chronic toxicity of effluents, receiving waters and chemicals. This test uses a decrease in the number of germinating zygotes relative to a control as an indication of toxicity. Hormosira are collected from rock platforms and returned to the laboratory. Spawning is initiated and the exuded gametes are mixed to facilitate fertilisation. Zygotes are then exposed to the test material for 72 hours, after which germination success is determined. Germination is indicated by the presence of a rhizoid, which is clearly visible 72 hours after fertilisation. Tests of extended duration can also be conducted upon request. For tests of extended duration, rhizoid growth is used as the endpoint. Rhizoid length is determined using image analysis. The H. banksii germination test can be conducted year-round and is one of the NATA-endorsed tests that we offer. The test is reliable and sensitive to a wide range of contaminants. The test is commonly used in a suite of 5 or more tests as generally required by the ANZECC water quality guidelines.